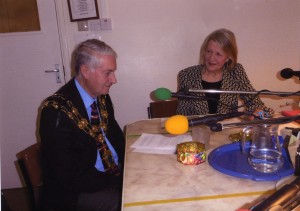 There was great excitement at our recording studio on the 7th January, when our Honorary President, His Worship the Mayor of Epsom and Ewell, Councillor Christ Frost and his wife, the Mayoress, Liz, visited us.

After chatting with our volunteers, and learning more about how we have produced and distributed our weekly Talking Newspaper for more than 40 years, the Mayor sat in for an ‘on-air’ interview with News Editor Jan Collier. 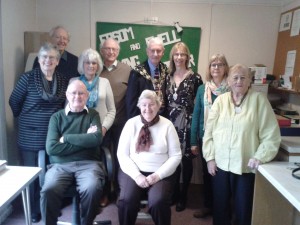 The Mayor and Mayoress’ Visit to the Studio

Welcoming the Mayor and Mayoress and thanking them for taking time out of their very full schedule, Jan asked the Mayor to tell us a little about a typical week in his year in office and about his three chosen charities. He began by saying how pleased he was that his wife Liz could join him on this visit, particularly as she was an Optometrist by profession and had a great understanding of a lot of the issues affecting many of our listeners.

He said: ‘No week is typical, every day is different and that is part of the pleasure of being the Mayor. We’ve been fortunate to have been part of some significant events in our year and one that immediately springs to mind is that all the Surrey Mayors were invited to Runnymede to witness the celebrations of the 800th anniversary of the signing of the Magna Carta.’

After chatting about his role as Mayor and some of the forthcoming fund-raising events, Jan put to him a final ‘surprise’ question. 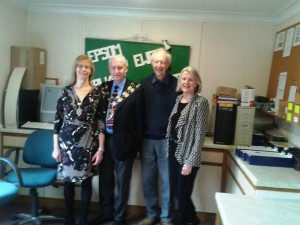 The Mayor and Mayoress with Roger and Jan

On learning that one of his personal interests is growing soft fruits, she asked if he had any tips for our volunteers and listeners. Smiling broadly, he replied: ‘I wouldn’t claim to be an expert but I have been growing soft fruits for many years. I find that pruning is a key part of producing a quality fruit, particularly red and black currants. Fertilising in Spring with sulphate of potash will help the flowers develop and if you are in rather an exposed area, cover with netting or put them in a fruit cage. I have tucked mine among my shrubs and so far the birds haven’t found them’.

The Mayor then thanked us for a most enjoyable visit and wished everyone at the Epsom and Ewell Talking Newspaper and all our listeners a very Happy New year.

The Mayor’s three chosen charities, for which he has been helping to raise funds, are local branches of Age Concern, Riding For The Disabled and the Epsom and Ewell Community Fund. ‘This is a new charity,’ he told listeners, ‘but part of a Community Foundation for Surrey charity, so it is a registered charity. It’s just one of the sections in this Surrey-wide charity. We are raising money from residents in the Borough primarily, and the remit is quite wide so we can give grants to any groups or charities within the Borough that need help. Our charity is slightly unusual, not many charities can give money to other charities, but we have deliberately organised this.’ For more information on the Mayor’s Fund-Raising Events please visit the Mayor’s Charities Events website or email events@mayorscharitiesepsom.org.uk